Are you ready to give your life for your country? For the privilege of voting? To defend your people from those who intimidate and would establish an autocratic legal system depriving many of basic human rights? When I started the DoD Blogger’s Roundtable this morning it was an add on to a very busy schedule and I was not sure how to talk about the Afghan legal system and its relevance to our readers! Then Colonel Rick Rousseau, with the Office of the Staff Judge Advocate (OSJA), NATO Training Mission Afghanistan & Combined Security Transition Command Afghanistan (NTM-A/CSTC-A) told me about First Lieutenant (1LT) Lutfallah Abrihimi, an Afghan soldier, legal officer and patriot!

Why is the Lieutenant’s story important to us? Because he did all of those things! He is why we are in Afghanistan and an example of a hero that can be used to explain to others exactly why we should oppose autocracy worldwide! But I get ahead of Col Rousseau’s story to the Roundtable!

Think of a country controlled in the past by the Taliban, communists, the Soviets, the tribal leaders and many others! Imagine the legal systems involved! Think of land ownership disputes! Try to get Title Insurance on that house! Or ask the county administrators for a land plat to determine who owns what! Take the next step and put yourself in the Afghan Army! Now you are an American legal officer giving advice to the development of the Rule of Law within the Afghan Army and the National Police! Head spinning a bit? That is Col Rousseau’s job with his staff of JAGs and legal advisors. He has three divisions that deal with specific issues including the legal systems for the National Police and Afghan Army.

They have stood up a national legal school for Army officers and are completing about 300 courts-martial a year! Rousseau said they had a developing system similar to the UCMJ. It has been successful but they were challenged when it came to senior officers (Colonels and above) which take political will to prosecute! They are “building the foundation” and the system is not perfect but developing. They are improving and adding significant numbers of judicial security officers and meeting the challenges of unlawful command influence head on! During one recent legal conference an Afghan general said they just had to do what is right! Getting that mindset to be the standard is the challenge!

They have added women in the legal offices as more women are recruited for the Army and police service as well! The colonel said they deal with family issues and abuse problems. He said they are crawling in this area but going to the walking phase. He has not seen any stigma or delays to continued growth in this area of the rule of law. The State Department is bringing in a special Ambassador this summer to deal with the entire Afghan rule of law issues. He is expecting a joint task force of multiple countries, government agencies, civilian and military, Non Governmental Organizations, etc to participate! Despite the challenges of so many folks being involved the colonel seemed excited to see progress in Afghanistan’s Rule of Law! Why? Let’s go back to the Lieutenant’s story!

Emergency leave requested properly for a family crisis in Kabul the lieutenant could not find air travel on such short notice from Kandahar so he jumped on a bus! It was the day after national elections – Aug 21st, 2009! The Taliban had threatened to cut off the fingers of those who voted since they could see the ink stains required to vote! The bus was stopped/hijacked by a group of Taliban as it moved the passengers to their destinations. The Taliban attempted to impose their form of injustice and Lieutenant Lutfallah Abrihimi said not on this bus and killed three of the Taliban with his service revolver before running out of bullets! Defying the remaining Taliban he died standing up for the rights of its citizens to cast a vote! To read more please go to Afghan Soldier, Lawyer and Hero and thank you Colonel Rousseau for telling us this story!

Do you want to listen to or read a transcript of the Roundtable? Please go to DoDLive! Want more articles from MilitaryAvenue.com on Afghanistan? Please go our Reading Room!Posted byColonel KonWednesday, May 26, 2010 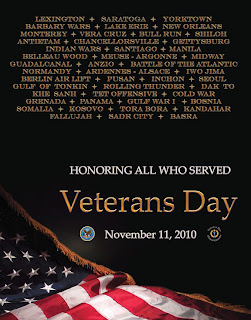 Veterans Day 2010 – What are you going to do for our Military-Veterans?